Thanks to Nasdaq’s loophole, Phunware, surged about 3,750% over six trading days 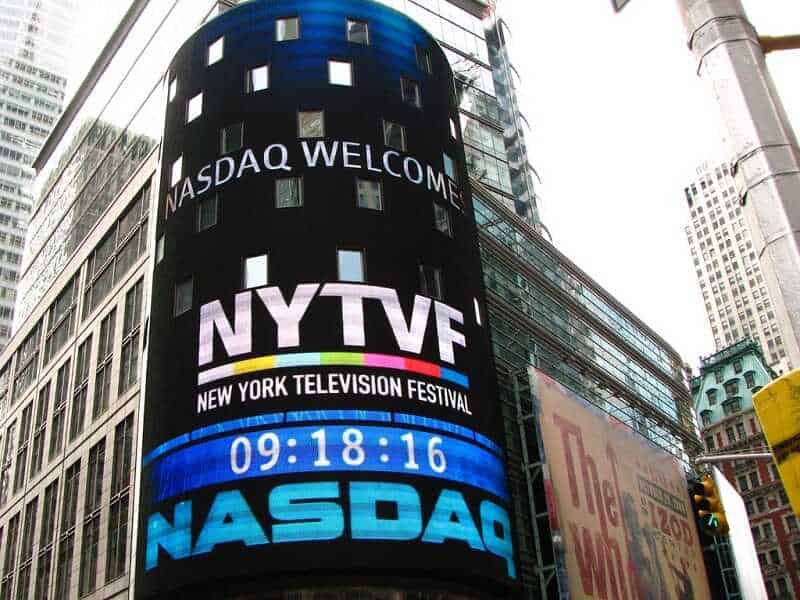 According to The Wall Street Journal,  Nasdaq’s loophole in rules is under scrutiny after a roller-coaster ride in the stock of one small company highlighted how firms can go public without ample shares to trade.

Phunware Inc., a software company preparing to launch its own cryptocurrency, climbed about 3,750% over six trading days to hit an intraday high of $550 a share on January 10. Only 144,000 shares were eligible to freely trade during that period, according to the company. The stock closed at $113.41 on Tuesday.

Nasdaq’s loophole in the rules

Nasdaq’s rules require companies listed on the exchange to have at least one million publicly held shares. The problem is that can incorporate shares which are restricted from trading. Such shares are those owned by employees or early investors who may be required to hold the stock for a period before selling.

The important fact is that Phunware, Inc. has not issued dividends in more than one year.

The important fact is that Phunware Inc. has not issued dividends in more than one year.

Their stock has been volatile due to the small supply of shares that can be freely traded.

Take a look at the chart below.

As soon as this week, Nasdaq will move to close the loophole by proposing to exclude restricted shares from the number that firms need to qualify for a listing, according to Nasdaq spokesman Joe Christinat. The Securities and Exchange Commission would need to approve the rule change.

What really is Nasdaq’s loophole

Shares of Phunware (NASDAQ: PHUN) rose 1,988% higher in January, according to data from S&P Global Market Intelligence. The provider of development tools for mobile apps, including a unique blockchain-based security token known as PhunCoin, started the month as a penny stock with a $310 million market cap.

By the end of January, Phunware’s stock closed at nearly $300 per share and a total market value of $9 billion. 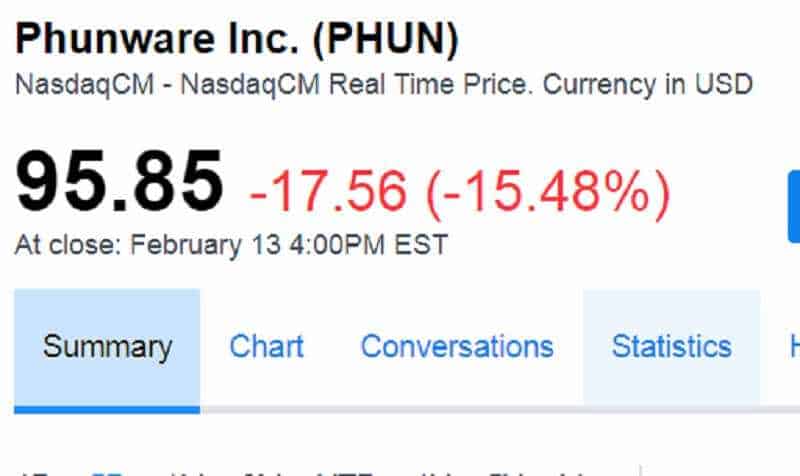 The surge started with Phunware establishing its merger with capital investment firm Stellar Acquisition III. The deal led Phunware onto the public markets after a decade of operations as a private company. During the period of two and a half years, they were collecting funds of Stellar Acquisition’s capital to use without a clear purpose.

The Austin-based company merged with a blank-check company that already had a listing on the Nasdaq. Blank-check companies, they are also called special purpose acquisition companies, or SPACs. Their purpose is to raise money from public investors with the goal of using the proceeds to acquire an existing business. The arrangement has gained recognition in the past several years, and Nasdaq is the most popular exchange for blank-check listings.

Share prices continued to soar as Phunware announced a handful of new patents and developer programs. That programs topped off by a launch platform for a public version of PhunCoin and a blockchain partnership with the powerful IBM.
The stock has settled down a bit in February and is now trading just 752% higher since the new year.

Nasdaq’s loophole has to be closed. The Securities and Exchange Commission would need to approve the rule change. “It shows a need for rethinking these rules,” said James Angel, a finance professor at Georgetown University whose research focuses on securities markets, in his statement for The Wall Street Journal. “We need to have enough shares in public circulation so we don’t have dislocations like we have seen here with Phunware.”

Phunware recorded revenue of $19.1m and a net loss of $2.6m during the six months ended June 30, 2018. But, Phunware lost $25.9m in 2017. Before the merger, its auditor, Marcum, said that there was “substantial doubt” about its ability to remain solvent.

Phunware is not a unique case.

Some other lightly traded stocks that emerged from deals with Nasdaq-listed blank-check companies have also experienced wild price swings.

Organogenesis Holdings, a developer of surgical and sports medicine products, resumed trading January 8 after merging with a SPAC late last year. The stock opened the following day at $15.60 a share and rose to an intraday high of $310.90 before closing at $82.35. Just 28,209 shares changed hands that day, according to FactSet.

A large portion of Organogenesis’ shares was restricted and unavailable for immediate trading after the company’s merger with Avista Healthcare Public Acquisition.

About 4 million Organogenesis shares were unrestricted on Jan. 8. Since then the number has risen to approximately 19 million, said Organogenesis spokeswoman, but she declined to comment on trading activity in the company’s stock.

The market is still getting excited about crypto

Phunware’s surge is proof positive that the market still can get excited about blockchain tools and cryptocurrency stocks. But we don’t have any actual business results available for this company yet. Is it an empty bubble with zero long-term value.? Or are we are witnesses of a future titan in the mobile app development market? Only time will tell. It is smart to stay on the sidelines until we know more about the new company’s business plans.

Truth is that blank-cheque companies are risky for investors because of their lack of operating history. But they are charming to exchanges, which compete for SPAC initial public offerings. About two years ago Nasdaq proposed to correct its rules to make it easier for blank-check companies to list on the exchange. But, facing shaded examples, Nasdaq ended up withdrawing the proposal last year.

Phunware, together with its managers and early investors, are now preparing to make available an additional 21 million shares, which would significantly increase the float of the stock, according to a regulatory filing made on February 5.

Containing the full system rules and unique cash-making strategies. You'll be surprised to see what indicators are being used and what is the master tuning for successful trades. Including case-studies and images.
Blank-check companies Nasdaq Phunware SPAC 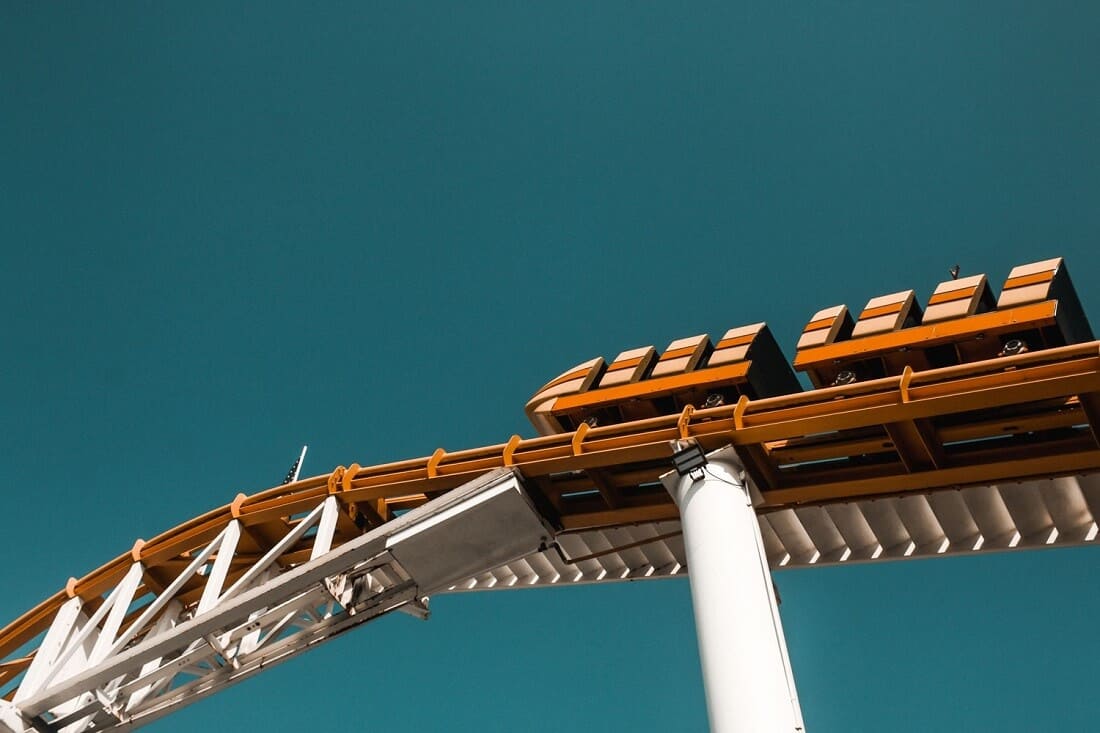 Expect More Volatility In the Stock Market This Year