Technical analysis is the interpretation of the price action of a company’s underlying stock (or any tradable financial instrument). It utilizes various charts and statistical indicators to determine price support/resistance, range and trends. It identifies historically relevant price patterns and behaviors to help forecast the potential direction of the stock. This methodology focuses only on the price of the shares, not the operations of the company.

The technical analysis concentrates on the study of market supply and demand.

People who are inside the business field usually know about their business better than people on the outside.

The judgment of people inside must be quicker and more accurate than the outsider. And the investment activities of such people inside have been recorded as the movement of the prices and the trade volume.

So, if you analyze the details of such movement and volume, you might find the movement of the antecessors.

The fact that the big change of the prices influences strongly to the investors applies to the people participating market at any time and in any situation.

The history repeats itself.

We have found that both fundamental analysis and technical analysis have strong points and weak points, and therefore if we use the strong points of both analysis, we might be able to become the ever winning investors.

When we look into price movements of a certain stock and other financial assets, we usually use the so-called candlestick charts.

A candlestick chart is a style of bar-chart used primarily to describe price movements of a security, derivative, or currency over time. It is a combination of a line-chart and a bar-chart, in that each bar represents the range of price movement over a given time interval. It is most often used in technical analysis of equity and currency price patterns.

They appear superficially similar to error bars but are unrelated.

Candlesticks are usually composed of the body (black or white), and an upper and a lower shadow (wick): the area between the open and the close is called the real body, price excursions above and below the real body are called shadows. The wick illustrates the highest and lowest traded prices of security during the time interval represented.

The body illustrates the opening and closing trades.

To better highlight price movements, modern candlestick charts, especially those displayed digitally, often replace the black or white of the candlestick body with colors such as red, for a lower closing, and blue or green, for a higher closing.

Every trader or investor should draw his or her own chart.

How to do that? How to draw?

We did it as you can see above.

First, draw the vertical line from the highest price to the lowest during the day. Then, draw the rectangle shape from the open price to the close price over the above vertical line. And if the close price is higher than the open price, this rectangle shape is shown in white and if the open is higher, it is shown in black. This white line is called “the sunny line” and the black line “the shadow line”.

And this rectangle shape is called the ”real body”.

A candlestick tells us various things.

The unusual long big real body is appearing occasionally once a month or two months when the movement becomes 2 to 3% of the price. You have to know that the usual average movement is around 1%.

The long real body and the short shadow simply tell us that the majority of the investors have followed the strong movement of the price and show their momentum.

But sometimes it is possible that they have been ended up with overshooting the market. When both the real body and the shadow are short, it tells us that the momentum of selling and buying is almost equal or investors see the market on the sidelines with no clear direction, or nobody is interested in the current market and leave it as it is.

The unusual short small real body is appearing, when the price movement is contained in the range of 0.5% or under of the price and this also appears once a month or two months.

Insert image price movement of a day (it’s just a suggestion, but should look like this with all elements included)

It is said that the long shadow generally tends to move against the shadow.

For example, the long lower shadow means that the price being sold heavily eventually returned to the level of the open, and at the end, the power of the buyer became stronger than the seller.

Hence, the buying power might be kept strong on the next day.

On the contrary, the long upper shadow means that the price being bought finally pushed to the open level, and the power of the seller was stronger than the buyer, then the market would be kept low on the next day.

What is the truth?

In reality, the price is likely to move toward the long shadow.

Quiz yourself about Technical Analysis of stock trends in the following quiz:

The best stocks to invest during an inflation 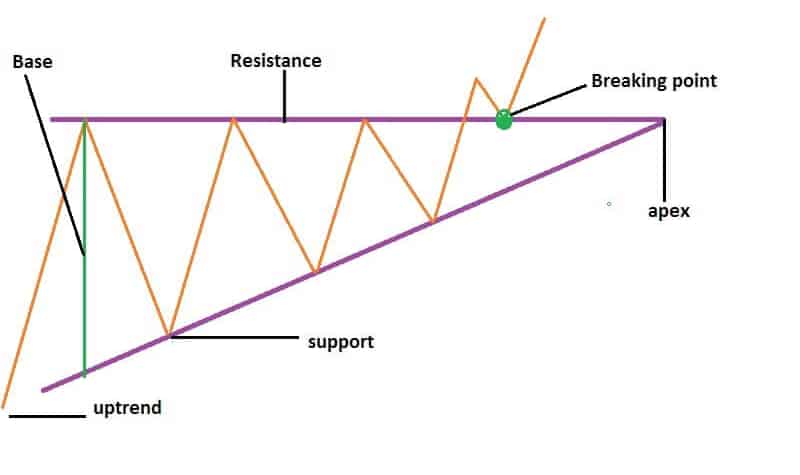